V200 and V4 | Understanding the heart rate zones of the racehorse 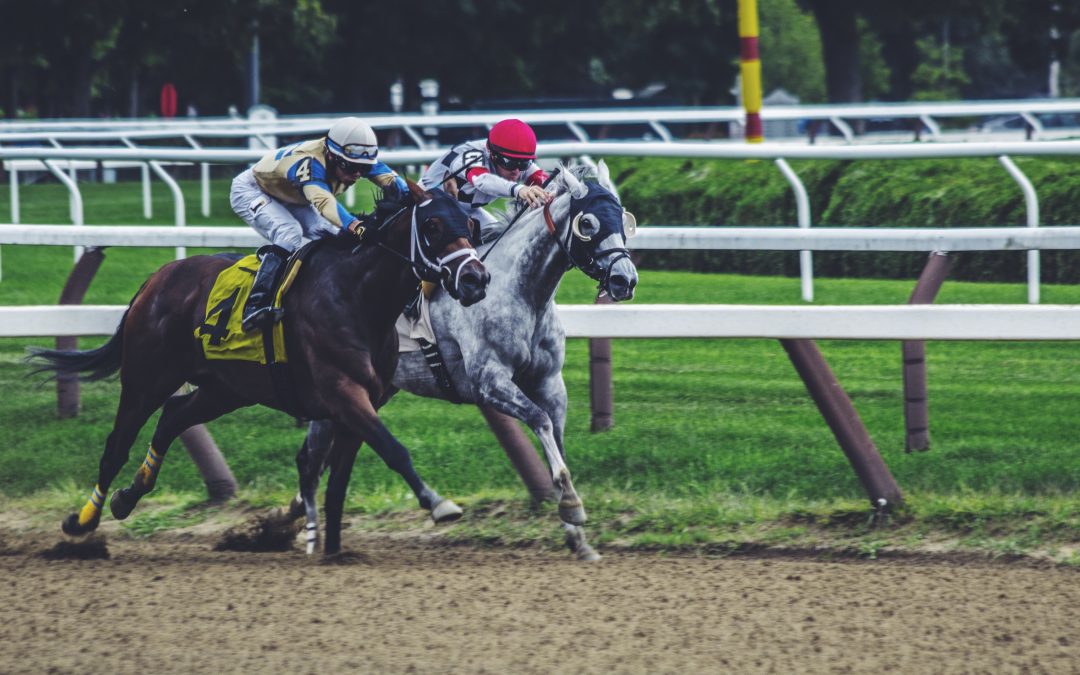 Heart rate is an important element of analysis of the racehorse athletic performance. For a long time, measuring a horse’s heart rate was a tedious task which had to be done in a specialized clinic and required many instruments.

The heart analysis of a racehorse heart rate is essential for medical monitoring and for optimising the training of the horse. Cardiac monitoring of your horses allows for the detection of respiratory pathologies and the avoidance of under or over training. In addition, by analysing key values such as maximum heart rate or V200 and V4, you can analyse a horse’s progress over time and compare your horses with one another.

Learn more about the usefulness of heart rate monitors for horses in our dedicated blog post.

The V200 and the V4, two tools that are still not widely used, are essential for establishing individualised and effective training. Their analysis seem to be more than ever relevant with regards to the increasing competitiveness of the horse racing sector.

Before tackling the V200 and V4, it is important to have a good understanding of the different heart rate zones in the horse. After performing a standardised exercise test (as explained in our article), you will have at your disposal the maximum heart rate reached by your horse, also known as maxHR. Several different zones are derived from your horses’ maxHR, corresponding to different intensities of effort, calculated in percentage of the maxHR.

A low intensity effort implies a low heart rate. This is the so-called aerobic zone. At low speeds, the body mainly uses the breakdown of fat by oxygen to produce energy. The advantage of this mechanism is that it is efficient, almost inexhaustible and does not produce lactic acid. In addition, it is a work that improves a horse’s fundamental endurance, to improve its stamina over time and its fitness level.

Conversely, during a more intense effort (above 80% of the maxHR) the horse works its anaerobic. At this intensity, the fats do not produce enough energy quickly enough. The body then breaks down the glucose and glycogen (sugar) reserves that are stored directly in the muscles, without using oxygen. Glycogen, unlike fat, is in short supply and produces waste products such as lactic acid. Its breakdown is rapid and produces more energy, but it cannot sustain an effort of this intensity over time. The presence of lactic acid can lead to pain and even injury.

In order to answer these questions, we present the V200 and the V4.

The speed at 200BPM or V200 is the speed reached by a horse when its heart rate is 200 beats per minute. It is a uniform value which, under equal recording conditions, allows horses to be compared on a common basis. In addition, if measured several times during the year, the V200 can be used to objectivise a horse’s progression through the season. An increasing V200 indicates a better state of fitness of the horse. A horse that runs faster at the same heart rate has a better cardio. 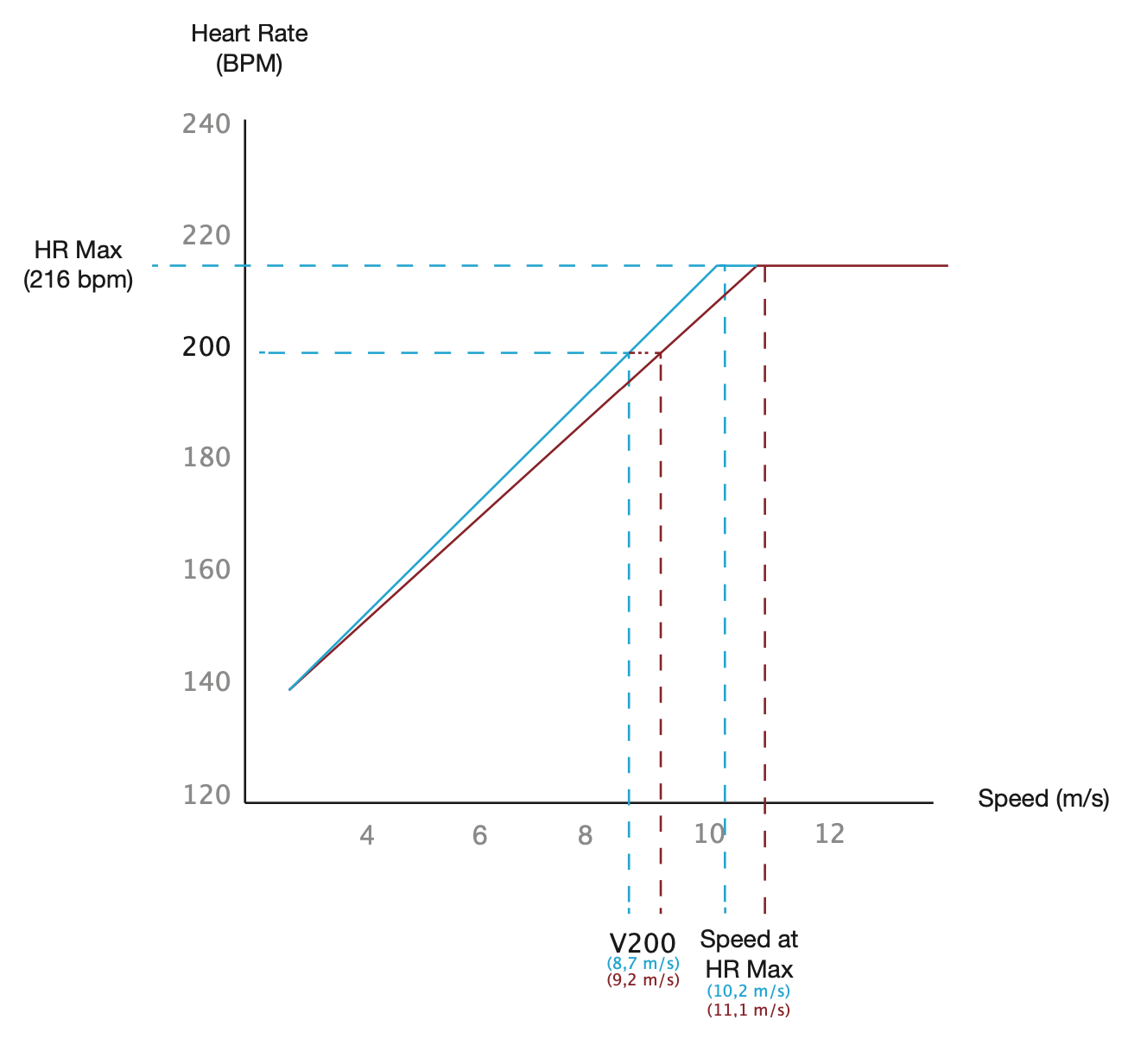 In the following graph we can see that the red and the blue horse have an identical maxHR of 216 BPM. The red horse has a V200 that is 0.5 metres per second (m/s) higher. When both horses reach their FCMax (216 BPM), the speed difference increases to a differential of 0.9 m/s. This indicates a better level of fitness in the red horse.

However, it should be kept in mind that horses have different maximum heart rates. Thus, a horse with a higher V200 than another is not necessarily faster.

Furthermore, the V200 can vary depending on external factors such as track condition, temperature or time of training. Therefore, in order to be able to compare several V200 (from the same horse or not) in a consistent way, it should be measured under similar conditions. If the recording conditions of the V200 differ too much, then the analysis will not be accurate.

V4 or VLa4 is the speed associated with a blood glucose level of 4 mmol/l. V4 is therefore reached when a horse has 4mmol of lactate (muscle waste) per litre of blood. This threshold is the transition point between aerobic and anaerobic effort. During an anaerobic type of effort, lactates become the majority source of energy creation.

V4 is therefore unique to each horse and varies according to its fitness level. Some breeds have a higher average V4 than others, highlighting the need to individualise training for each horse. If a horse’s V4 increases it means that its ability to remove lactates has improved, indicating better fitness and resistance to intense exercises. The faster lactates are eliminated, the better a horse is able to maintain its effort over time and the less risk of pain and injury.

However, like the V200, the V4 is dependent on many exogenous factors such as the track slope, type and quality of the ground. Therefore, researchers have established a variant: the HR4. This measures the heart rate of a horse when the 4mmol/l threshold is reached. Generally situated around 170 BPM, the FC4 is therefore independent of the exogenous factors mentioned above.

The use of heart rate to monitor and analyse physical effort is a common practice in all high performance sports. Racehorses, like any regular athlete, need this monitoring to perform and maximise their chances of winning.

Therefore, a thorough heart rate analysis with indicators such as V200 or V4 is fundamental to a successful training program. Using heart rate is a guarantee of clear results. It allows to improve as much as possible the fitness of the monitored horse and to maximise its well-being while respecting its capacities.

EQUIMETRE’s mission is to facilitate the collection of heart rate data and to democratise its use in the equine industry. Obviously, heart rate is only one of many data points to be analysed. Arioneo also helps you collect and analyse valuable data on the speed of racehorses and their respective locomotion.