Standardised test of effort in horses 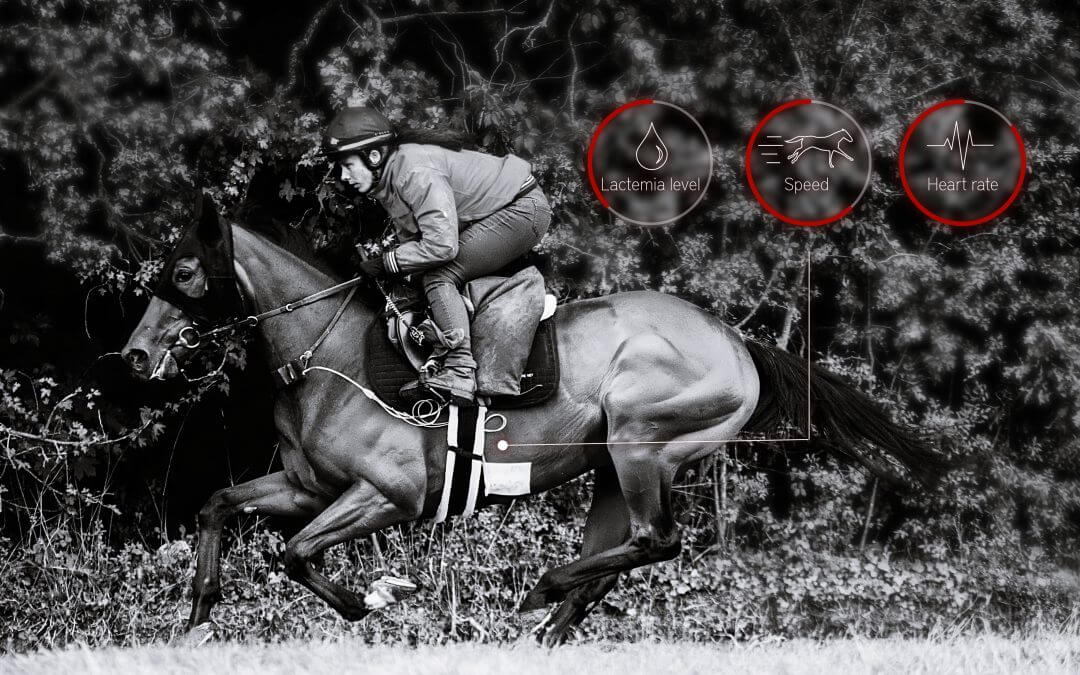 A standardised test of effort is a tool to assess a horse’s training capacity by objectifying his response to training. It is the physiological monitoring tool for equine athletes par excellence.

Although the racehorse is a true athlete surrounded by a complete and diversified team, the actors evolving around him are limited by an important factor: the horse does not speak. Trainers, jockeys and veterinarians must rely on their instincts and feelings in order to adapt training, detect pathologies and ensure the well-being of this animal. Thus, answering the biggest question in the minds of a team of a racehorse, “Is my horse ready to win this race? “ is more complex than for a human athlete. Knowing the physiological functioning of one’s horses allows us to measure their progress and fitness, and allows to answer this ultimate question. The standardised test of effort is a tool enabling us to evaluate a number of important parameters that will certainly help to better answer this question.

2. Goals & utility of a standardised test of effort in horses monitoring

3. The triangular effort test in horses

4. The standardised test of effort effects

The horse’s respiratory system provides oxygen to the organs through the respiratory tract and the lungs. It is a central organ with certain limitations. The horse can only breathe through the nose and through relatively narrow airways. When galloping, he can only breathe at the rythm of his locomotion and therefore has no possibility to choose his breathing frequency. Finally, even though the respiratory system of horses is developed, it is not possible to improve it during training, unlike the muscular system.

The cardiovascular system is composed of the heart and blood vessels. It allows efficient blood circulation and ensures the transport of a large volume of oxygen, especially to the muscles. The volume of blood that the heart ejects at each beat during cardiac contraction (stroke volume) is more than one litre in the race horse. The weight of the heart represents about 1% of the mass of a horse during training will tend to increase its cardiac mass to the magnitude of +15%. This improves heart capacity and allows the heart to be less tired by beating more slowly for the same amount of work.

Understanding the different metabolisms by which energy is released is essential to study the horse’s response to exercise. Just like humans, depending on the intensity and duration of the effort, there are three ways to produce energy in the horse’s body.

During intense and very short exercise, a small reserve of energy in the muscle is used. This energy is called adenosine triphosphate or ATP. However, this reserve is weak and is consumed very quickly, so it does not provide sufficient energy for an effort lasting more than a few seconds. Thus, longer exercises require two other systems of production: the aerobic and anaerobic pathways.

The aerobic pathway is established during prolonged exercise at low speed and intensity. The body uses the oxygen supply to burn sugar and fat to produce energy. As long as there are substrates, this process has the advantage of being virtually inexhaustible and produces no lactic acid. This allows the horse to produce a sustained effort over time. The aerobic phase must develop over time and is dependent on the amount of oxygen assimilated by the horse. For example, the quantity of oxygen is limited by the maximum heart rate (FCmax), which is specific to each horse and varies little with age. Once the maximum heart rate has been reached, the volume of oxygen assimilated can hardly be increased.

If the effort increases, the anaerobic way will take over. However, the anaerobic route produces waste products in the blood: lactates. If there is not enough oxygen, the muscle cell will acidify and generate muscular fatigue, thus preventing the horse from holding his effort.

Knowing the maximum heart rate and monitoring the heart rate during a standardised test of effort allows us to understand a horse’s physiological system and explain a good performance or, on the contrary, a poor performance.

Lactate or lactic acid is produced during intense muscular effort when the cells are not sufficiently or totally lacking in oxygen or when the aerobic metabolism is in saturation. Excessive lactate creation occurs when the muscles’ glucose requirements exceed their oxygen supply. Blood lactate levels measure the balance between the body’s production and elimination of lactate. Once the anaerobic lactate threshold is reached, the muscle fatigue induced by the lactates will not allow the muscles to continue their effort.

Thus, lactate levels are an excellent indicator of energy metabolism and muscle fatigue to assess the performance of the racehorse.

The literature reports various effort tests, most of them on eventing horses. This article reviewed the literature to present the triangular test, which is scientifically validated. Because of their cardiac capacity, racehorses and eventing horses are outstanding athletes. However, the intensity of a training session is evaluated by the jockey or trainer, without any real measuring instrument to qualify the effect of a training session on the horse based on tangible data.

The essential parameters of the exercise test are heart rate, speed and blood lactactes levels.

Goals & utility of a standardised test of effort in horses monitoring

An exercise test is a tool to characterize a horse’s work capacity by analysing his response to training. At the end of the test, the trainer and the rider are able to adapt the training program according to the results. It is a tool measuring long-term follow-up because it allows to visualise the level of fitness of the horses during the training progress. The investigation of counter-performance is also reported.

The triangular effort test in horses

It is possible to determine heart rate/speed and lactate/speed curves in standardized exercise tests. These tests are known as triangular tests: the intensity of the effort increases progressively over time, in successive stages, separated or not, of recovery phases. At the end of each stage, the heart rate and lactate levels are measured.

The test used by Bernard Auvinet, Patrick Galloux et al. when writing the article “Standardized Field Exercise Test for Eventing Horses” proposed 3-minute stages, with 1 minute rest between each stage. The total distance covered was 8850m, and a warm-up phase of 6 minutes at trot over 1500m was carried out. Note that shorter steps would not allow the collection of representative and relevant data because the heart rate would not have time to be stabilized.

Once the test is performed, it is possible to determine the transitional zone of aerobic-anaerobic metabolism using the heart rate/speed & lactates/speed curves. The Kindermann concept published in 1979 allows to define the so-called Kindermann thresholds. These thresholds make it possible to differenciate the succession of the different energy pathways during exercise:

Thanks to the heart rate/lactates & lactates/speed curves, it is possible to associate the lactate levels with the corresponding heart rates. Thus, an excellent knowledge of the horse’s physiological system will be acquired. The trainer will be able to adjust his training by individualizing it to each horse with the physiological adaptation necessary to win a race.

4 parameters are to be evaluated

The V4 corresponds to the anaerobic threshold, i.e. one goes from an aerobic effort to an effort known as lactic anaerobic: the production of energy generates lactates.

The standardised test of effort effects

One of the main effects involves the long-term monitoring of the horse, especially between the different training cycles. The progress of the training can be tracked with the measured data from two exercise tests (one at the beginning of the cycle and one at the end).

Through training, the body optimizes its process of energy production and consumption. This leads to a decrease in heart rate at this speed. A trained horse will “push back its VMA threshold”, i.e. it will be able to run faster and longer without producing lactic acid. In addition, a horse that trains in its anaerobic zone regularly (beyond its threshold) becomes able to better tolerate lactic acid: the effects on the functioning of his muscles will decrease. However, these sessions are very stressful and must be carried out with care.

Thus, an efficient and well-followed training will develop the horse’s aerobic capacity. This will result in an increase in the LV4 while the FC4 is constant. The horse will be able to run at a higher speed for the same heart rate.

However, the exercise test also highlights training that may not well be adapted to the horse’s needs. For example, if the LV4 has decreased while the heart rate has remained constant, this means that the horse is running at a lower speed for the same heart rate. This can lead to fatigue, heart pathologies and not effective training.

The triangular effort test described here is specialized for eventing horses or trotters. It has been scientifically validated and widely used since its creation. It is a tool for acquiring an excellent physiological knowledge of the functioning of racehorses. It allows to adjust and measure the efficiency of a training. However, because of its stressful nature, it must be supervised and carried out with care.