Energy production in the athletic horse

Energy production processes in horses are key component of performance.

To better analyse heart rate, recovery and make an objective diagnosis of the fitness of your horses, it may be relevant to dive into the physiological mechanisms at work when the athletic horse is training.

This article provide you with some physiological knowledge for the equine athlete, displayed in a simplified manner in order to be able to apply them to your racehorses’ training.

The body and especially the muscle cells need energy in order to produce a physical effort. This source of energy is called adenosine triphosphate or ATP. The body has a very small reserve of ATP present in the muscle cells. Thus, the necessary energy must be generated continuously to meet the body’s demand.

1. The energy production process in horses

The energy production process in horses

Every exercise, regardless of its intensity, requires an energy supply from the adenosine triphosphate molecule, also called ATP. Indeed, this molecule is the essential energy component to allow muscles to respond to exercise. It is the only source of energy used for muscle contraction and release. Without an adequate supply of ATP energy, muscle filaments cannot energize properly.

Unfortunately, muscles are only able to store a limited amount of ATP, which does not allow them to sustain the effort for more than a few seconds.

In other words, for a horse to sustain its effort for more than a few seconds, it must be able to re-synthesize ATP quickly. There are different metabolisms capable of re-synthesizing ATP quickly, and their involvement depends on the effort intensity and duration.

In order to provide energy, ATP is broken down into ADP (adenosine di-phosphate). Indeed, the energy comes from the degradation of the phosphate. Thus, the structure of the molecule is transformed from three phosphates (Tri) to two (Di), with the release of energy.

Once the ATP resources are exhausted, the horse’s organism needs a continuous supply of energy in order to replace the phosphate and reform it into Triphosphate from Diphosphate. In order to achieve this chemical process, there are several methods/sources:
– Creatine Phosphate (CP) provides energy that can be directly used to re-synthesize ATP.
– The chemical degradation of glucose/glycogen and fats by aerobic or anaerobic metabolism.

Before going any further, here are some essential definitions in order to fully understand the rest of the article.

Mitochondrias are an organelle present in muscle cells in which aerobic metabolism takes place to produce energy. They can be characterized as the “powerhouse of energy” since they convert energy resources into ATP using oxygen.

Glycolysis is the breakdown of glucose.

Pyruvate is a cellular essence that provides energy. It is the end product of glycolysis, and is the consequence of the oxidation of glucose in the muscle cell.

The role of glucose and the glycolysis chemical reaction

In order to re-synthesize ATP from ADP, muscles require the breakdown of glucose or glycogen in a chemical process called glycolysis.

Muscles can use immediately available glucose resources, or store it as glycogen. During exercise, glycogen goes through a series of chemical reactions (glycolysis) that do not require oxygen. From these reactions, the breakdown of glycogen generates an end product called pyruvate. Once created, pyruvate can either be converted to lactates or enter the mitochondria.

Once pyruvate enters the mitochondria, a series of slow chemical reactions allow the release of hydrogen, in the form of ions. These ions are collected by Nicotinamide adenine dinucleotide (NAD) which becomes NADH to transport hydrogen ions into the system. Electron transfer is the main function of NAD.

Transformation into lactate (anaerobic pathway)
Pyruvate accumulates and is converted to lactic acid due to the accumulation of hydrogen ions in the body, which in turn occurs due to the imbalance between the chemical reactions taking place during glycolysis and the ability of NAD to remove the excess. These hydrogen ions must be removed as they contribute to increased acidity levels in the muscle, and this can reduce the efficiency of the energy creation process. To alleviate this problem, pyruvate accepts them and in doing so creates lactic acid.

Pyruvate enters the mitochondria (aerobic pathway)
The end of the aerobic process occurs when electron transport takes place. This involves combining the use of oxygen and hydrogen to form water and carbon dioxide. Without a satisfactory supply of oxygen, hydrogen ions cannot be transported properly, and pyruvate then converts them to lactates.

Thus, it is the intensity of the exercise that determines the metabolism necessary to create energy.

Recently, many studies, particularly in the field of human sciences, have been conducted to review the different mechanisms of energy production. It appears that lactates are not only present in the anaerobic pathway, but also in the aerobic pathway. Thus, lactate could be considered as a source of energy, and not a waste product of a biochemical process. Finally, none of the metabolisms could take place without the use of oxygen. However, there are no scientific studies dedicated to equine athletes. Our team will update this blog once studies are done on the equine athlete.

At low speeds, the body mainly uses the deterioration of fat by oxygen to produce energy. This mechanism is highly efficient, being an almost inexhaustible source and does not produce lactic acid. We are talking about an aerobic process. However, it is slowly implemented by the body and the amount of energy delivered is limited by the amount of oxygen available. The amount of oxygen assimilated depends on various parameters such as the volume of the lungs, the breathing rate, the volume of the heart or the efficiency of cardiac contraction. For example, the amount of available oxygen is limited by the maximum heart rate (FCmax), which is specific to each horse and varies little with age and training. The maximum heart rate is not an indicator of fitness. Once the maximum heart rate has been reached, the volume of oxygen assimilated can hardly be increased.

When the effort becomes more intensive, the fats cannot produce energy quickly enough. The body will then degrade the glucose and glycogen (sugar) supplies that are stored directly in the muscles, without using oxygen. Unlike fat, glycogen is present in limited quantities in the body, but its breakdown is quick and produces more energy. This process is called anaerobic. Nevertheless, it produces a waste product: lactic acid. If there is not enough oxygen in the blood to eliminate it, the lactic acid accumulates in the muscles, degrades the quality of contraction and can cause pain: the effort must be limited in time.

Effort zones are generally defined in terms of HRmax, as follows:

EQUIMETRE allows you to know how long your horse stayed in the different effort zones, according to the type of training conducted.

Data from the Equimetre Platforme

Thanks to training, the body can optimize the processes of energy creation and consumption. At a given speed, it needs less energy and therefore less oxygen, which leads to a lower heart rate at that speed. A trained horse will “push its MAV threshold”, i.e. he will be able to run faster and longer without producing lactic acid. In addition, a horse who regularly trains in its anaerobic zone (beyond its threshold), will better tolerate lactic acid. The effects on the functioning of his muscles will decreased. However, these sessions are very demanding and must be carried out with care.

It should be noted that at the beginning of a training, all three sources of production begin to work. The cycle using fats is the slowest to be implemented, but it is the one offering the best performance. This is why warm-up is essential to allow the processes to initiate. It should also be noted that after exercises above the MAV threshold, the heart rate generally remains high in order to provide the oxygen necessary to eliminate lactates: it is as if the body had contracted an oxygen debt that is compensated with a HR staying at its maximum even after the speed has decreased. A rapid recovery is often the sign of a horse that produces little lactate during exercise. 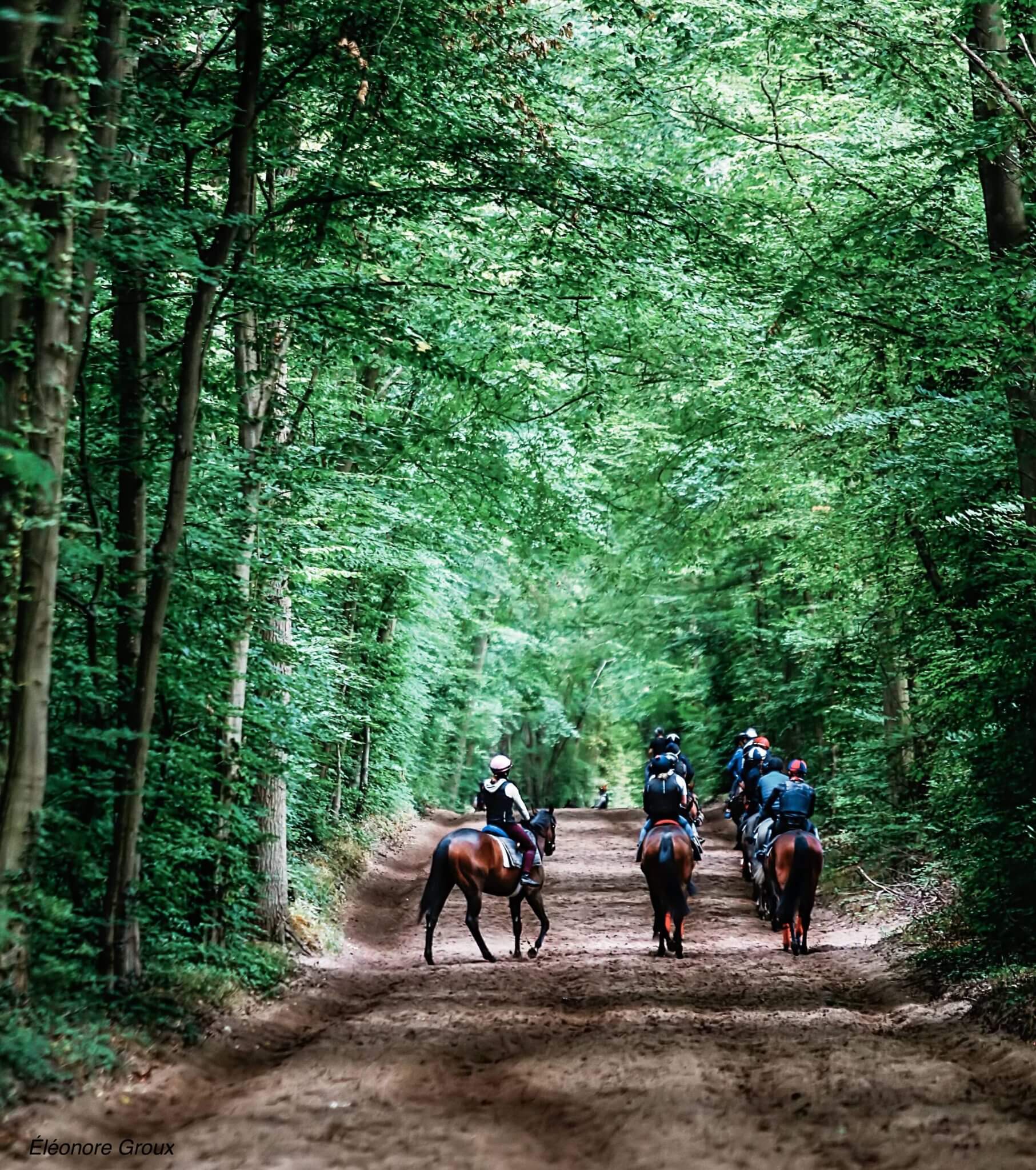