Pulmonary haemorrhage in the racehorse 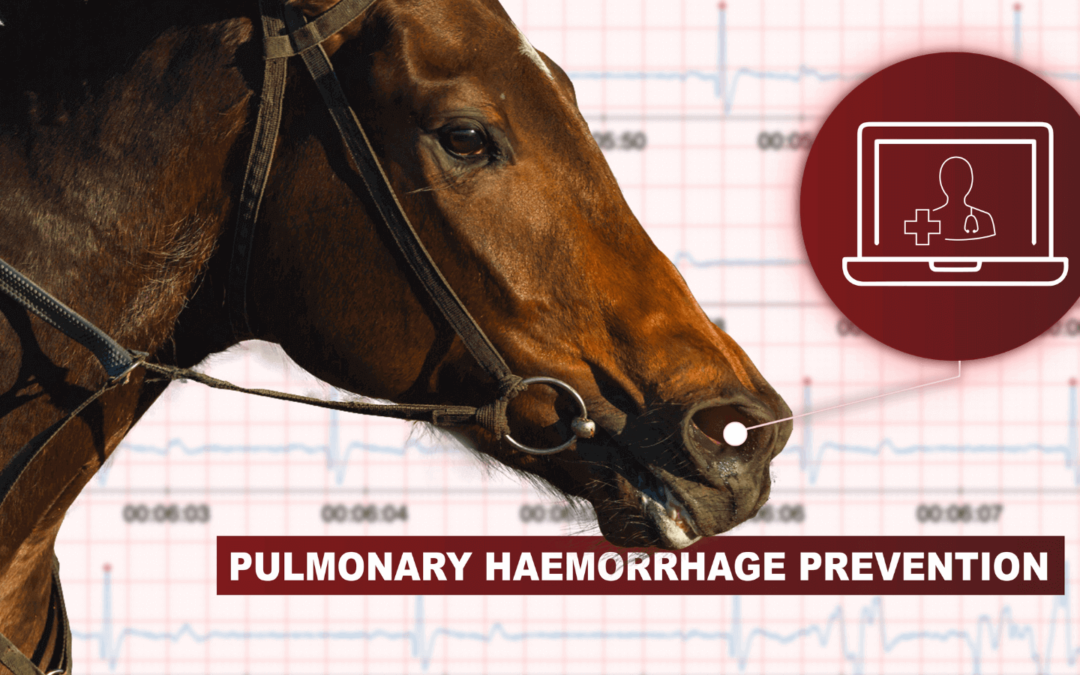 Our team had the chance to interview Dr. Emmanuelle van Erck, veterinarian specialized in equine sport medicine, about the consequences of pulmonary haemorrhage in the racehorse. This pathology affects many racehorses, and its detection can sometimes be difficult. Indeed, the symptoms are most often sub-clinical, i.e. invisible to the naked eye.

“Only 5% of horses that have had a pulmonary haemorrhage during a race have had blood in their nostrils, which means that the remaining 95% have had blood only in the airways, which is not visible externally.”

Could you define what a pulmonary haemorrhage is?

Pulmonary haemorrhage is a bleeding happening in the lung of the horse. They usually occur in horses undergoing intense exertion, such as racehorses and eventing horses, but can also occur more rarely in other disciplines such as show jumpers or endurance.

Theoretically, pulmonary haemorrhages are triggered when there is significant hypertension in the blood vessels in the lungs. These vessels burst, causing blood to flow out of the lung. It is not painful for the horse, but free blood in the lungs can oxidize and lead to secondary inflammation.

In the longer term, repeated bleeding can harm the horse’s respiratory capacity, resulting in a progressive decline in performance.

If lung haemorrhages are not detected, can they become dangerous?

Generally speaking, pulmonary haemorrhage is not dangerous. When a horse dies suddenly in a race with signs of a lung haemorrhage, other health problems are often correlated.

The lung can be seen as the thermometer of the horse’s general health. Lung haemorrhages can be the result of inflammation or injury to the lung. But they can also occur in other circumstances. For example, in the case of cardiac arrhythmias, when the blood does not flow smoothly through the body, there can be significant increases in pressure in the blood vessels, which can cause haemorrhages. Jumping horses (racing) or horses working on the hard ground have a higher frequency of lung haemorrhage.

Do pulmonary haemorrhages affect both the airways and the heart?

Yes, they affect the airways and the heart as they start at the alveolar-capillary barrier, the thin membrane separating the respiratory system from the vascular system. The role of this membrane is to move oxygen from the lung into the bloodstream.

So is it the membrane that tears during a haemorrhage?

It can be subjected to very intense pressure variations, with blood pressure or negative pressures on the respiratory side.

Let’s take the example of a horse that has cornhole (paralysis of the throat). Therefore, he has difficulty passing air properly because it reduces the diameter of his upper airway. When he takes his breath, his respiratory system has to develop much more negative pressure to pass the same amount of air like a horse without pathology. Therefore, this negative pressure has a direct effect on the lung membrane, i.e. the alveolar-capillary membrane. From that, we can conclude that obstruction of the upper airways can promote pulmonary haemorrhages.

On the other hand, this barrier is also affected by blood pressure. If the blood pressure increases, especially in the lungs, the following phenomenon occurs: something pulls on the respiratory side and pushes on the cardiovascular side. It is under the effect of these opposing forces of tension that the membrane can tear.

What are the symptoms, clinical and sub-clinical, of pulmonary haemorrhage?

Only 5% of horses that have had a pulmonary haemorrhage during a race have had blood in their nostrils, which means that the remaining 95% have had blood only in the airways, which is not visible externally.

The other symptoms usually appear between 30 and 90 minutes after the effort. If an endoscopy of the trachea is performed, in only 25% of cases can blood be seen in nature. For the remaining 75% of cases, a bronchoalveolar lavage, a respiratory sample taken from the lungs, is the most reliable way of making a diagnosis.

The veterinarian puts a small amount of sterile saline into the airway and lung. After collection, this fluid will be mixed with lung cells, which will allow us to find signs of bleeding.

The lungs are cleaned by cells called macrophages, which “eat” everything in the lung, including red blood cells. During digestion, these macrophages will change their appearance, like haematomas which will change color over time. It’s the same thing for macrophages: the pigment arrival of the haemoglobin of the red blood cells will change and become concentrated over time, which will allow us to date the haemorrhagic episodes approximately. The sample will enable us to check if there has been a bleed in the past. So we can get an idea of the lung condition and, therefore, the respiratory capacity of the horse.

” By monitoring horses that have bled in the past, EQUIMETRE can use data to tell us whether the horse has regained average athletic ability or is still handicapped by previous bleeding or something else. It can be an interesting way to see if the horse is ready to resume more intense work. “

Can you tell us about the risk factors?

For your information, horses have a much higher blood pressure than humans, as it is naturally four times higher! Therefore, pulmonary haemorrhage in humans is quite rare, whereas it is common in horses.

There are five main risk factors:

Can the use of a sensor like EQUIMETRE, with heart rate monitoring, help to detect symptoms early on?

A tool like EQUIMETRE can help to identify risk factors for pulmonary haemorrhage. As musculoskeletal pain, respiratory problems, and cardiac arrhythmias contribute to bleeding, EQUIMETRE can monitor all these data.

Thanks to the electrocardiogram recording, we will be able to analyze whether the horse has remained aerobic for a long time and quantify its recovery, giving us an idea of whether there is a respiratory problem.

Regarding the locomotion, too, we will be able to see if its parameters are deteriorating, which can be a sign of pain, a factor favoring haemorrhages.

The EQUIMETRE does not allow us to make a black or white diagnosis, but it can highlight indicators of risk factors.

By monitoring horses that have bled in the past, EQUIMETRE can use data to tell us whether the horse has regained average athletic ability or is still handicapped by previous bleeding or something else. It can be an interesting way to see if the horse is ready to resume more intense work. 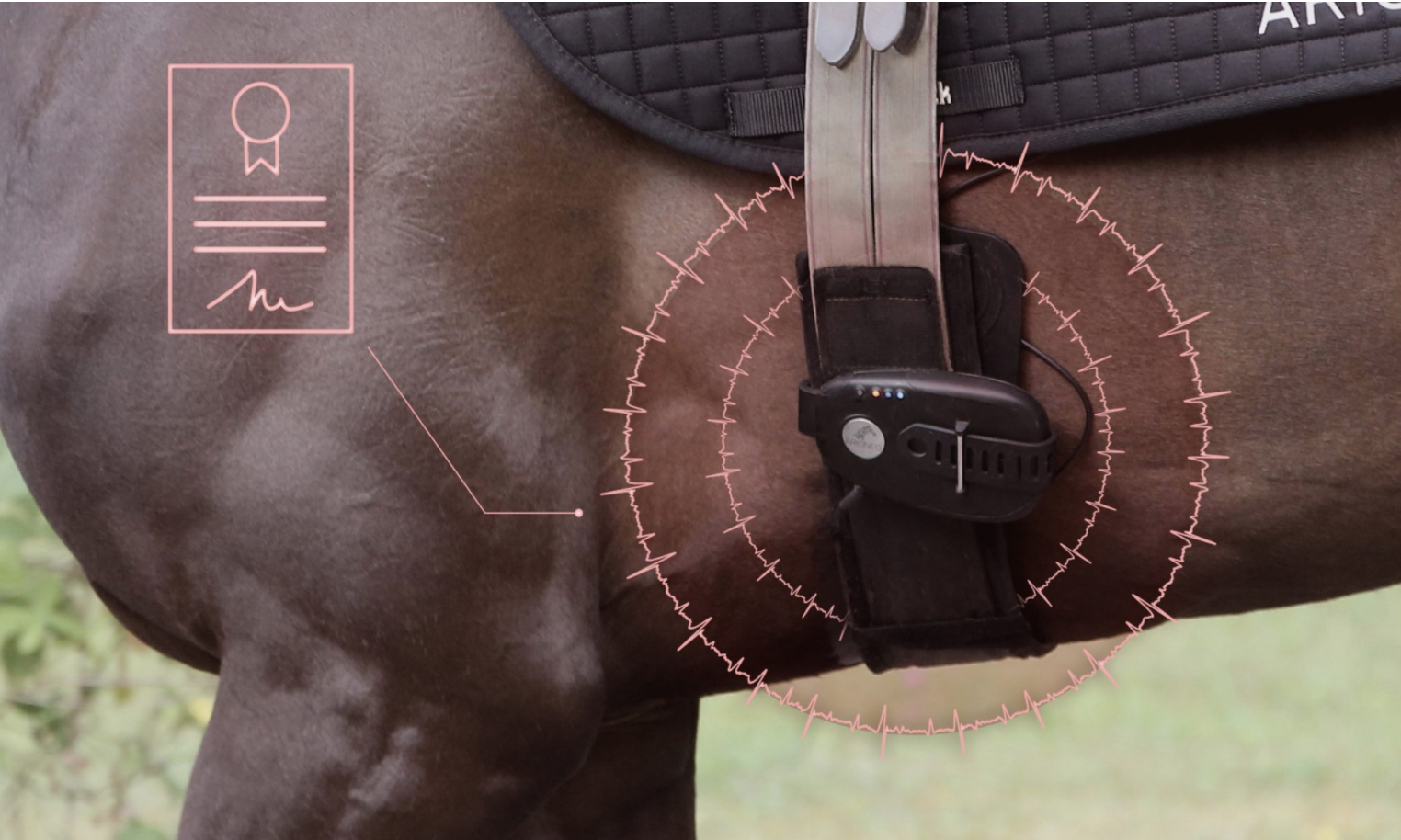 Is a horse that has had a lung haemorrhage prone to having one again?

The tissue is reconstituted slightly during the healing process and is, therefore, less elastic. The same thing happens with tendonitis: the tendon is less flexible when it has healed, which occurs with the lung. As the lung fills with air more efficiently when it can expand properly, a loss of elasticity can result in a loss of breathing capacity. It is therefore essential that horses are treated as soon as possible.

How are lung haemorrhages treated?

The first step is to find and eliminate the factor that is causing the bleeding.

Treatment should be tailored to whether the horse is suffering from, for example, upper airway obstruction, lung inflammation, or locomotor pain. If the condition causing the bleeding is not treated, the bleeding will not disappear.

Once the pathology has been eliminated, it is possible to optimize the healing of the lung with anti-inflammatory drugs and, if necessary, with antibiotics in the case of secondary infections.

Supplements such as vitamin E can also be given as it helps the lung heal more elastically.

It is important to remember that haemorrhages are a symptom of another abnormality. Still, when they occur repeatedly, they become a disease affecting the horse’s lung integrity and respiratory capacity.

Is it possible to prevent the risk of bleeding?

Indeed, anything that promotes the health of the horse’s respiratory system is beneficial.

Several measures can be taken to optimize a horse’s respiratory health:

Of course, you should not hesitate to have your horse examined in case of doubt.

Are there any special measures regarding bleeding and the health of racehorses?

Lung haemorrhages can occur during brief, intense exertion, such as jumping for a sport horse. In racehorses, it is a relatively common occurrence.

Different racing authorities react differently. For example, in the United States they were allowed to use a drug (Lasix) to reduce the pulmonary pressure, which dehydrates them heavily. This approach, which helps upstream treatment, is gradually being banned in the US, and is already considered doping in Europe and Australia.

Each country has its measures, but in France, there are no such strict rules.